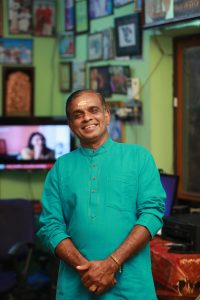 K.K.Ramachandra pulavar was born on 25-05-1960 to late Guru Shri: K.L.Krishnan kutty pulavar and Gomathy ammal. He was born into a traditional family with a rich historical background, he had studied Tholpavakoothu by his great guru/father from the age of six. He soon achieves all the aspects of Tholpavakoothu within the period of childhood. While he was going with his father he follows the traditional style of puppet performance even now also. He follow the 11th generation from the followers of guru were endowed the talented skills in this artform Chinathambi pulavar, Ela pulavar, Appanna pulavar, Lakshmana pulavar, Krishnan kutty pulavar. Guru Krishnan kutty pulavar took this artform from the temple primes to outside. It can easily grow up in kerala and all around the world of puppetry. Ramachandra pulavar are also engaged in this artform with his new contributions and his own great effort to promote this artform in kerala ,Ever year from the month of December to June he was performed in 40 temples in 7,14,21,41,71 days and also he performed 500 staged every years out the temple primes in  Kerala –India ,and abroad. From 1978 I had assisted G.Venu who had played a major role in Tholpavakoothu renovation. 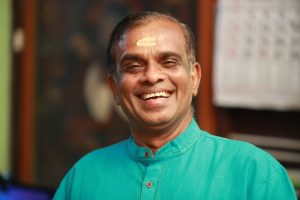 Ramachandra Pulavar belongs to the elder son of Shri Krishnan Kutty Pulavar who was the eminent scholar and performer of tholpavakoothu. Among the generation of puppeteers my father and we took revolutionary effort in bringing the art form more popular. I was observing that transition keenly which made me to direct many new contemporary stories to shadow puppetry. I was employed in the post office department and I quit that job to make this art form as a profession.  I am the only one and first practioners who had adopted folk tales and contemporary awareness stories to tholpavakoothu. 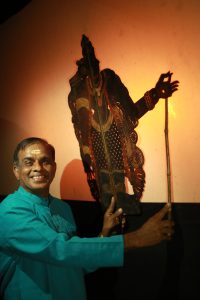 The largest achievement he considers is getting the recognitions from the temple authorities for safeguarding the art form without losing its aesthetic beauty. Sangeet Natak Academy New Delhi had honored by Rashtrapathi Puraskar in 2016.  He had translated Balakandam and  Aryuanakandam to English in 2005. Participated in many national and international puppetry festivals which reached me to receive many achievements.

Shri Pulavar has contributed a distinctive way to popularize the art form in public spheres as this artform is having many barriers to perform in contemporary stages he had brought this with great challenge. For that Shri Pulavar has innovatively created many new contemporary stories through tholpavakoothu like Mahathma Gandhikoothu, Jesuskoothu, Ayyappacharitham, Mahabharatam, Mahabalikootu, Chandalabishuki, Election Awareness, Social awareness stories, Anti-Ragging campaigns, Food safety awareness and social consequences of deforestation, Swachh Bharat programs, COVID awareness campaigns, Modikoothu, COVID Lockdown stories .